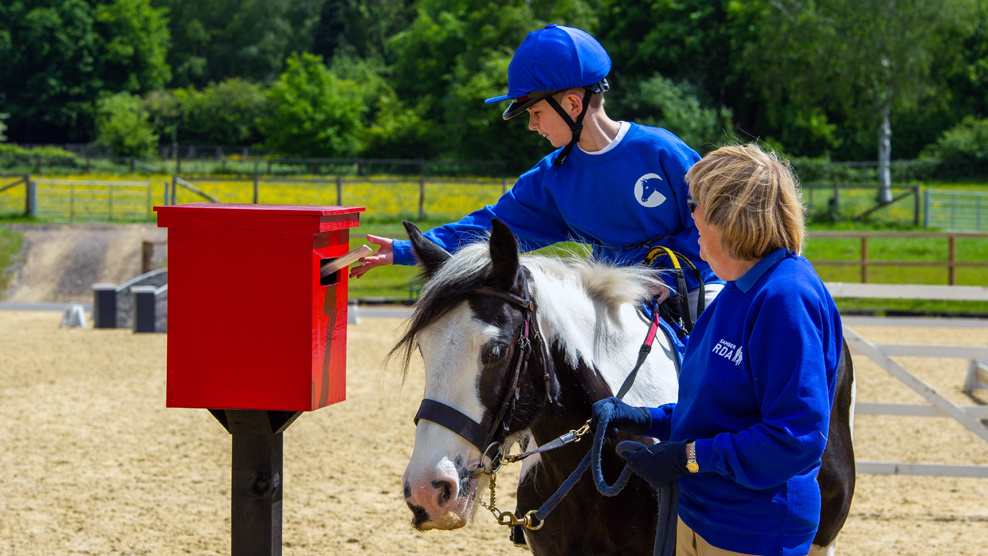 The Riding for the Disabled South East Region Challenge Day saw riders representing RDA groups from Kent, Surrey and Sussex converge on East Grinstead’s Felbridge Show Ground last Thursday (May 19th). The event featured the Countryside Challenge competition which was a qualifying event for the RDA National Championships in Hartpury, Gloucestershire in July.

Most of the riders had come to go head-to-head in the Countryside Challenge but there were also dressage classes and the ‘Television Programmes’ themed fancy dress competition which rounded off the day. This was judged by Sheila King and Samber RDA (Woking) triumphed with their sensational Blue Planet entry.

The Countryside Challenge follows a simulated course where the riders put their skills to the test by tackling obstacles and tasks they might find in the country. These include negotiating a gate, crossing a ‘road’, encountering cows, sheep and hens, picking an apple from a tree and posting a letter. Although great fun, steering, balance and confidence are all put to the test.

In the Countryside Challenge qualifiers two groups dominated - East Park RDA (Newchapel) and Quest RDA (Chobham). Quest’s Alfie Barton and Gabriella Fox qualified in Junior sections whilst Zac Galt took 1st place in his class to qualify as a Senior. It was a clean sweep for East Park in the Visually Impaired class with Zoe Beer qualifying in 1st place and Erin Hunt in 2nd. East Park’s Oscar Jones took the top spot in his class to secure qualification.

There was success for Eridge RDA (Uckfield) in the non-qualifying classes, including a win for Anna Jones. The group were at the competition for the first time and were awarded the Newcomer’s Trophy for their successful day. Chalkdown RDA (Staplehurst) celebrated double wins for Jack Baldwin in the Juniors and Steph Baldwin in the Seniors who both topped their dressage and Countryside Challenge classes. Fairlight Hall RDA (Hastings) were well represented and stole the show in the Senior Independent class with an impressive win for Zoë House. In addition to their Fancy Dress success Samber RDA’s Juniors took the top 3 places in their class with Yusef Ramzan in 1st.

Dressage top spots were dominated by Chalkdown RDA including a win for Ami Rumble. There was success too for Bradbourne RDA (Sevenoaks) with Khianna Lucas-Young winning both her class and the Helen Blakey Trophy for Best Turned Out. Quest’s Gabriella Fox added to her Countryside Challenge success with a win in her dressage class.

Pauline Roestenburg, RDA South East Region Chair, congratulated everyone that took part. “It was such a joy to see riders, ponies and volunteers taking part again in their group colours after 3 long years. We can’t wait to do it all over again!” she said.