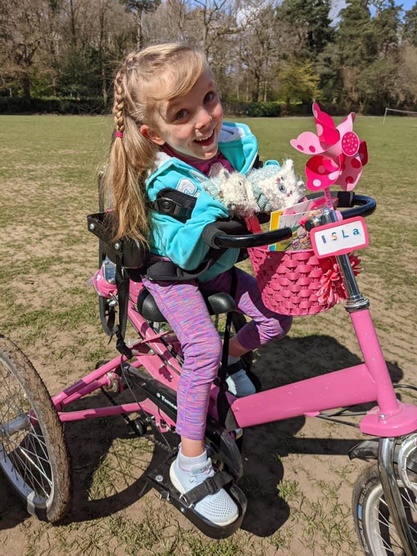 Isla Williams on her bike

One young rider at Quest Riding for the Disabled Group near Chobham has undertaken an amazing ‘Captain Tom’ challenge of her own to raise much needed funds for the ponies she loves. This week she also undertook her first TV interview to raise awareness.

Isla Williams, aged 7, has an extremely rare and disabling genetic condition of Fibrodysplasia Ossificans Progressiva (FOP), which progressively causes extra bone to form in the connective tissues. Despite this, Isla took up the RDA Group’s Golden Anniversary Challenge Campaign and decided to cycle 50 times around her local recreation ground to raise sponsorship. Her current total is 9 times her target at over £2,300.

When Michelle Dewberry, GB News presenter (and winner of the first-ever Apprentice) heard about Isla’s feat, she asked to feature her in the regular “good news” section of their Dewbs & Co programme last week (Thursday 17th June).

Isla has very little movement in her upper body and her shoulders and elbows are locked bent. Despite this, Isla absolutely loves riding as it gives her the freedom of movement that she otherwise wouldn’t have.

In April 2021, Quest RDA celebrated its 50th Birthday but obviously had to close its doors to its riders and was unable to open until it was safe to do so.

“This has had a great impact on its funding but it still has to meet the costs of keeping 6 horses as well as the extra costs of making the group COVID safe” says Group Chair, Julie Jones. “With annual costs of £40,000, Isla’s and the other participants’ wonderful efforts, will help enormously.”

Quest is keeping the Golden Anniversary Challenge Campaign open until the end of the year and they hope that more people will take on a challenge.

Isla’s fundraising page can be found at https://uk.virginmoneygiving.com/FOPFriendsofIsla

Currently, other Quest Challenges include:

RDA is very popular, and for every 1 participant there are another 4 on the waiting list.

RDA is very popular, and for every 1 participant there are another 4 on the waiting list.