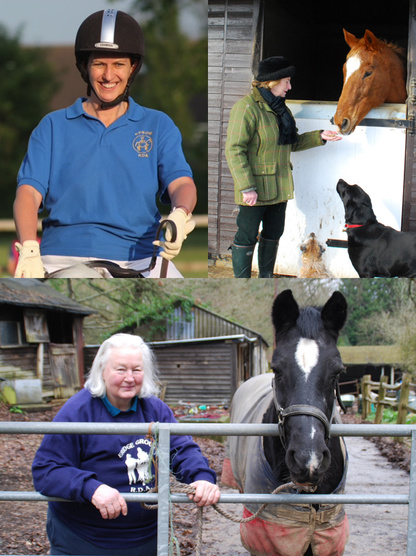 Three long standing volunteers have been selected as recipients of this year’s Riding for the Disabled Association Presidents’ Award - the most prestigious award presented by the RDA for exceptional dedication. What’s more exceptional is that two are from the same Group.

Bridgyd Richards from Fairwarp and Sally Grainger (Bidborough) are both from Eridge RDA (which meets in normal times at Chelwood Gate) and Jo Lee is from Epsom RDA. It is hoped that all three will be able to receive their awards in person from the RDA President, HRH Princess Anne, at a prestigious event as soon as circumstances allow.

Bridgyd Richards is a stalwart of Eridge RDA and has been for 46 years, having joined soon after the Group’s inception. She has been a committee member and trustee ever since - a record of volunteer service unequalled in the Group.  Indefatigable in attendance at committee meetings, riding sessions and fundraisers, she has shown a life-long commitment and loyalty to the riders.  She is the Group’s memory-keeper and an unflagging proponent of the charitable aims for which the group was founded so many years ago.

Bridgyd has never missed the Monday session despite the years of milking and caring for her prize Jersey herd of cows until her retirement and now, despite hip problems, she still attends to keep records of each session.

“I am so thrilled to have received this award as it was so unexpected. I have had a wonderful time, visiting many other groups and competing three times at the RDA Pony of the Year at Wembley - even coming second.” says Bridgyd. “It’s been a great ride and still is!”

Her many years of experience with disabled children has stood the Group in good stead. Bridgyd simply is Eridge RDA.

Sally has given a lifetime of service to Eridge RDA and has remained quiet, unassuming and constant throughout. She started as a teenager over 40 years ago and has always been a firm favourite with the riders with her reassuring and friendly manner.

Sally has been the Group’s Secretary, a pony keeper, a pony transporter, an occasional rider’s chauffeur, a Christmas Lunch Chef, a weekly volunteer, a keeper of confidences for parents, volunteers and trustees. She has supported the Group in at least five moves, secured and overseen healthy finances, seen many riders progress from tots to young adults and shy volunteers become confident instructors.

“I was really surprised but absolutely delighted to have been given such an amazing award.” says Sally. “It has been a privilege to have been able to help and I have met so many inspiring young people, their parents and carers and have learned from them all."

Sally is certainly a rock of the Eridge Group which would be lost without her and would not have flourished in the way it has.

Jo Lee began with Epsom RDA in 1989 as part of her Duke of Edinburgh Award and in the three decades journeying from teenage volunteer to Trustee and Group Coach, Jo has made an outstanding contribution to the Group and is very much at its heart. As well as coaching disabled riders on her regular Wednesday evening riding sessions, Jo has responsibility for overseeing the care of the charity's herd of 10 horses. In addition, she is always prepared to step up and lead on a myriad of other activities to help the Group including organising the in-house riders’ championships, tackling the logistics of volunteers, riders and ponies travelling to Regional Championships and National Championships as well as fundraising and making sure the yard is kept in an orderly fashion.

Jo said “When I first arrived at Epsom RDA as a teenager I never for one moment imagined that Epsom RDA would become such an important part of mine and my family’s life. I am delighted to have been recognised in this way, but I am mindful that I am one individual representing the wider Epsom RDA community.”

There are over 500 RDA Groups across the UK, and the number is growing.

There are over 500 RDA Groups across the UK, and the number is growing.